Known as one of the great masters of Prog-Rock, the canadian Band Rush is still on tour, reaching Europe this Spring and Summer. 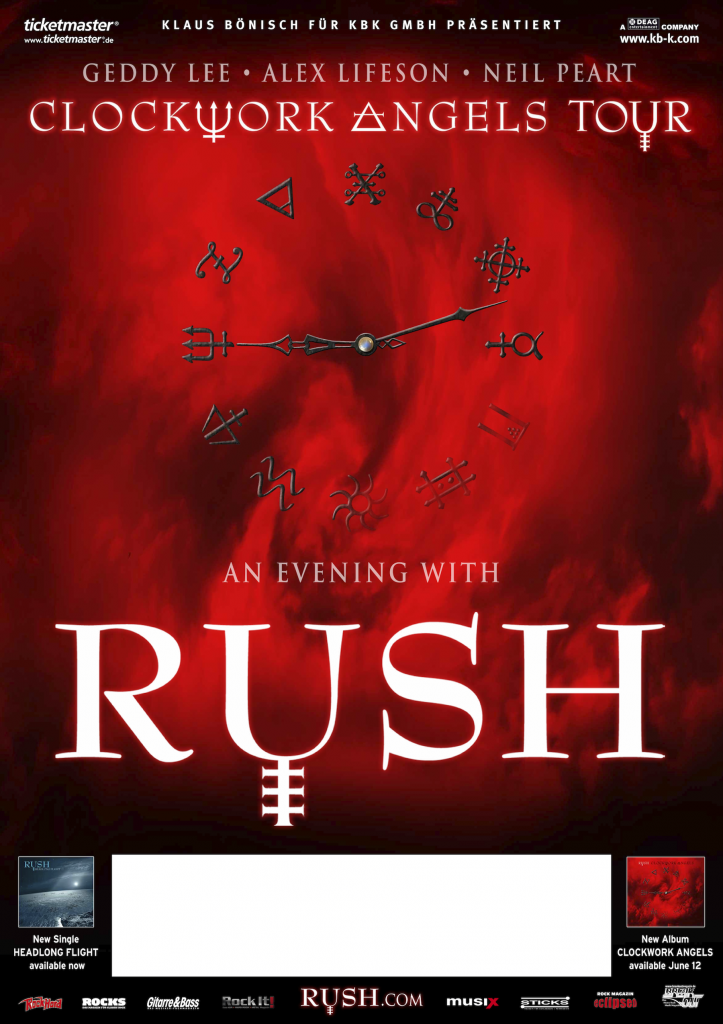 Although working as trio for more than three decades they do have one permanent, faithful collaborator: the famous Starman. 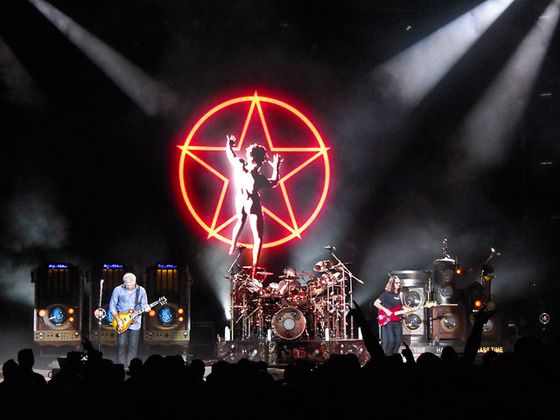 This somehow mythical Starman is part of the well-known Illustration, which shortly after it’s debut emerged as a true pop-symbol: with style, attitude – and a story behind. 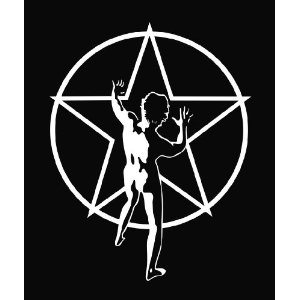 Created by canadian graphic artist and musician Hugh Syme, this Illustration is a unique combination of a line art symbol – a five-jagged star surrounded by a circle – with a drawed person. It appeared for the first time on the back cover of the 1976 published Rush-Album „2112“. 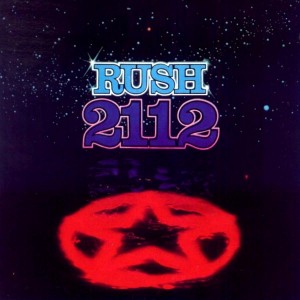 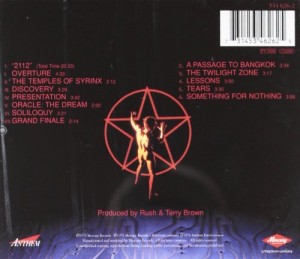 The symbolism in it can be put down to the scenario of the truly ambitious Album-concept of „2112“, which was kind of a gloomy Science Fiction plot, created by the musicians  – Geddy Lee, Neil Peart and Alex Lifeson. Therefore the Universe will in the year 2062 experience a galaxy-wide war, which „results in the union of all planets under the rule of the Red Star of the Solar Federation. By 2112, the world is controlled by the „Priests of the Temples of Syrinx,“ who determine the content of all reading matter, songs, pictures – every facet of life. A man discovers an ancient guitar and learns to play his own music. Thinking he has made a wonderful discovery that will be a boon to humanity, he goes to present the guitar to the priests of the Temples, who angrily destroy it and rebuke him for unearthing one of the „silly whims“ that caused the collapse of the previous civilization. He goes into hiding and dreams of a world before the Solar Federation. Upon awakening he becomes distraught and commits suicide. As he dies, another planetary battle begins resulting in the ambiguous ending „Attention all planets of the Solar Federation: We have assumed control.“ [Rush-Musicians: http://en.wikipedia.org/wiki/2112_(album)]

Equipped with this plot and the music of Rush, canadian Graphic Designer (and musician and part-time-contributor of Rush) Hugh Syme created the Artwork, with the circled around red star as Brand and Sign of the forceful and orthodox Solar Federation. He than added the Personification of the brave and chosen „man“, standing naked in front of the Red Star, freezed in a dynamic gesture, that shows defence at the same time as offensive – in a kind of martial art posture. In various statements for the music Magazine „Creem“ in the early Eighties, Hugh Syme explains the basic intentions for his work: „What I did do with that particular cover was read their lyrics, and understand that there is a good force and a bad force: the good force was music, creativity, and freedom of expression – and the bad force was anything that was contrary to that. … The naked man, … all it means is the abstract man against the masses. The red star symbolizes any collectivist mentality. The (star)man is the hero of the story. That he is nude is just a classic tradition…the pureness of his person and creativity without the trappings of other elements such as clothing. … We basically based that cover around the red star and that hero.“ [Quoted from FROM BRAINWAVES TO TIDAL WAVES: THE STORY BEHIND RUSH’S ALBUM COVERS , RUSH. BUT WHY ARE THEY IN SUCH A HURRY? and http://en.wikipedia.org/wiki/2112_(album)]

So this is the story behind the Starman: Born in progress, just as one piece of the conceptional artwork for a conceptional album – by the way a very typical birth for a „Sign“ of a Rock- or Pop-Band. Very often, famous Brand-Visuals appear first as organical part of a whole album-artwork, not featured, sometimes nearly hidden, but weren’t intended as THE Logo. For example, the one-leg-flute-solo-silhouette of Ian Anderson, that became the unmistakeable Sign for Jethro Tull. Or the four bars-asterisk of the Red Hot Chilli Peppers.

So, how come, that the Starman evolved from a story-embedded hero to subject to an essential motif of Rush – and then to their worldwide well-known Symbol?

„Initially, that logo didn’t begin as an identity factor for the band, it just got adopted. We didn’t consider it a mascot overall icon of representation for the band at the time“, commented Hugh Hyme [Same source as mentioned above]. So, as in so many other Pop-Symbol cases, the perception of a particular piece of Artwork by the audience, by the fans is real force in making the Starman the quintessential Logo of Rush – and that remarkable fast, or, so to speak, in a real rush. And the Band assumed this acceptance by their crowd, understanding it quite right as identification with their work, their music, their ideas. So they admitted the Starman soon after his appearance in the late Seventies as permanent companion for their musical and artistic journeys around All The World’s Stages (to variate the Title of their 2 Record Set-Live Album):

But, not to forget: There was and there is also a typographical „Logo“ of Rush: Originally in a primary red and with bold, late Sixties-like rounded, somehow hippiesk Letters. It is a conspicuous Logo and famous as itself.

Often used by Fans, by the Media and for Merchandise. The Band didn’t used this typographical Logo over decades – they variated the four Letters in many ways, as the covers beneath will show. Nevertheless, the bubbly, pop-art-oiece of Type-Logo remained as the original and most significant, for merch and more. 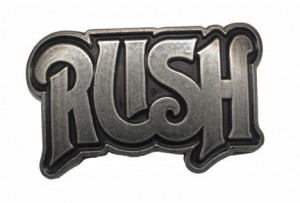 But, once again, it’s the Starman, that accompanied Rush, as part of Neil Peart’s drumkit, as (animated) visualization on stage screens, and of course, mainly on album covers: 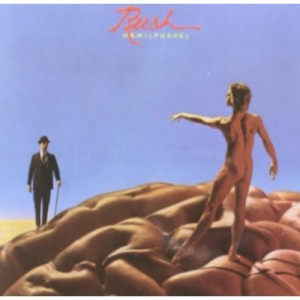 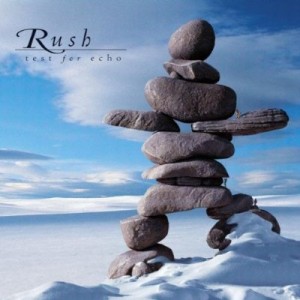 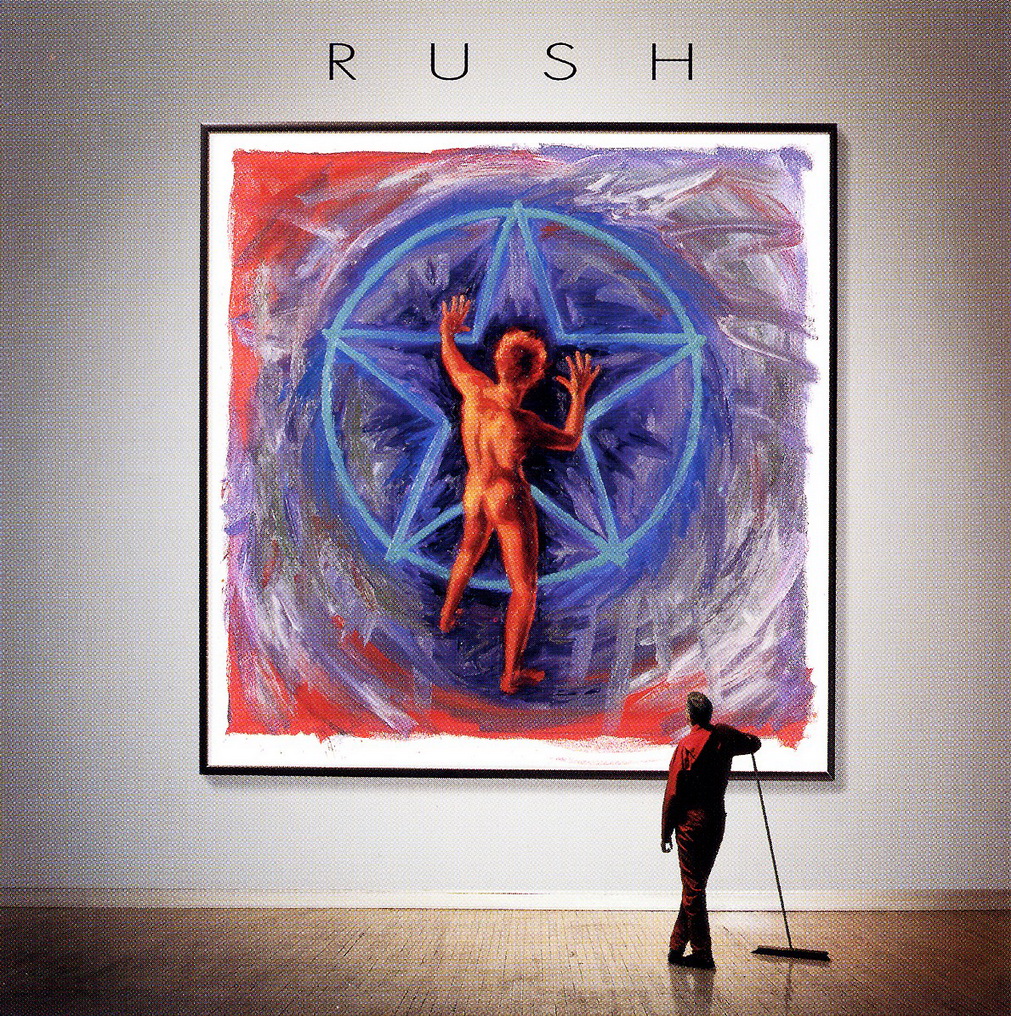 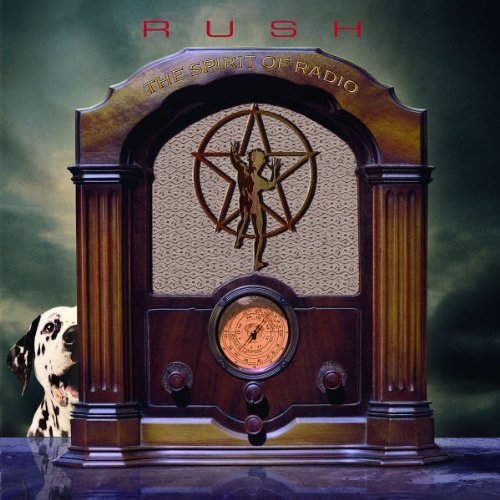 At the end of the day of visual communication for this survived Classic Rock Music Act, it’s the Starman that – in all meanings – „stands for“ the Band Rush. Their fans as well as the merchandise companies, which work(ed) for Rush, they all explored different Rush-looks, even combinations of letters with the Starman-Sign: 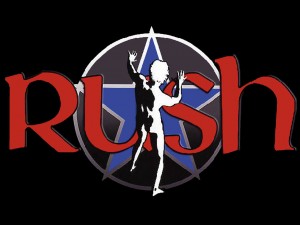 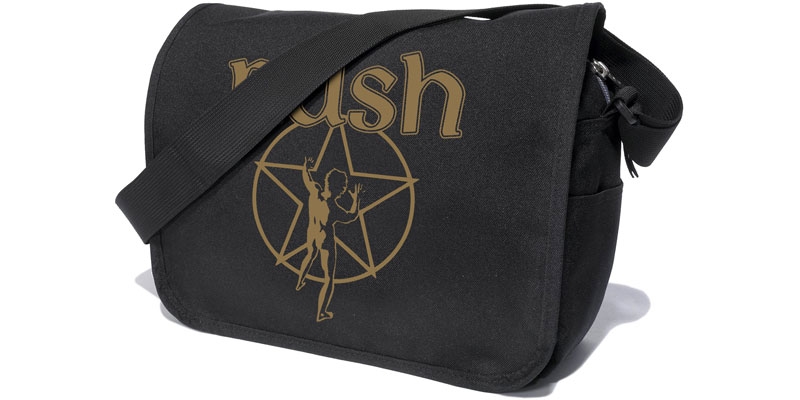 But clearly the Starman alone had won. He is and will be the Spirit of Rush, the nameless prophet – which is allowed to be drawed. What could be a better evidence for deep identification with a Band’s creation, than implementing it under the skin, in this case as Starman-tattoo? [Found at http://www.therushforum.com/index.php?/topic/61593-starman-tattoo/] 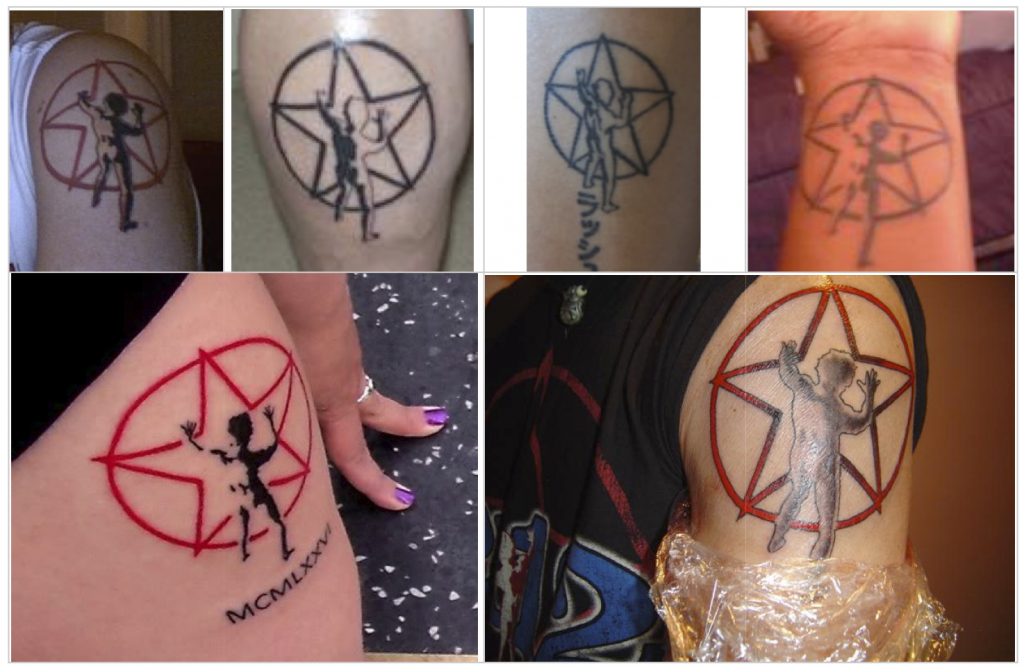 So the Starman is Soul and Buddy – for Rush as well as for all Rush-Fans. What gives him such a strong impact? Maybe, because the 2112-album is handled as the most typical and strongest Rush-Album ever. Maybe, because the fairy-tale from the future in 2112 tells about the believe in music as a forceful power. Maybe, because it’s just a very good illustration with a story in it, the story of an artful future-hero on a mission: to fight the mean federation – with meaningful music.

No wonder, that this in all meanings really strong Symbol finally got statued, for putting the Starman on the desk or into a shelf. The way to this creation was not easy for Knucklebonz, a specialized company for producing such collectibles, as founder Tony Simerman reflected in a radio-interview [Rush Starman – Making of the Rock Iconz Statue @ KnuckleBonz, Rush Starman – The Making of the Rock Iconz Statue (Part 2)]. Initially, he offered Rush to produce statues of Geddy Lee, Neil Peart and Alex Lifeson, but the Band refused. However, the second try, a transformation of the famous 2D-Starman-Illustration into a 3D-Sculpture, attracted the Rush-Musicians much more. And it was the idea of Geddy Lee, to variate the color of the drawed Starman from yellow/orange to metallic silver, because of his association to the Silver Surfer. 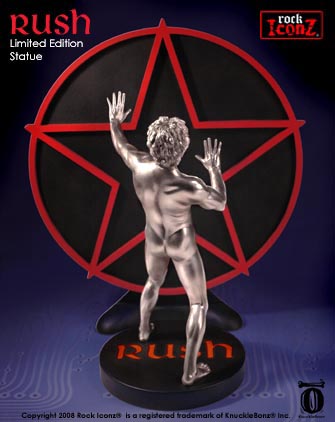 Interestingly, the success of this statue opened the mind of the three Rush-musicians for letting Knuchlebonz produce Sculptures of them in their Seventies look: with loooong hair. 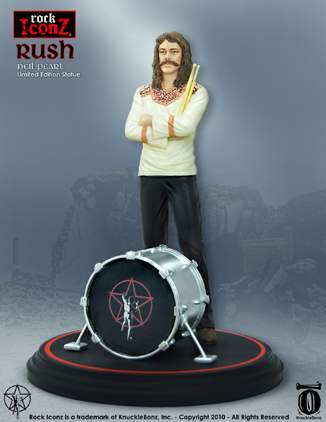 But, hey, looking good as little Sculpture, these guys are still alive and kicking on world’s stages, so they could let the Starman strike on and on. And so they do:

Actually, he’s part of the Live-Shows, acting on the big stage-screen, as usual in colorful, psychedlic animations – and a little bit unusual, too. (What a nice proof for Rush’s sense of self-irony):

So, it seems that we don’t have to worry about  this excellent Pop-Symbol – and about the music at all: he still protects it for us.